Inches vs Watts on speakers, what does it mean? What is the difference?

I was looking at a powered speakers catalog here, http://www.soundz.co.za/c792-1/Powered-Speakers.aspx

When you have a measurement of inches referring to a speaker it is the diameter of that speaker, so a 12" 400W speaker is physically 12" wide and is rated at a maximum of 400 Watts.

The wattage is so you know how much power you can push through the speaker without damaging it.

The physical size is very closely related to the sound, for example to get a good bass response you need to be able to physically move a lot of air - so the only way to do this is with a large speaker. If you want a high frequency response you need a small speaker cone that can be moved very fast. These two differing requirements are the reason you have bass, midrange and treble speakers in any hifi system, and you split the frequency ranges to the appropriate speakers.

Both the inches and the Watts are suggestive specifications of the following:

The reason these are suggestive, is that they don't really tell us the important figures - they just suggest what these may be.

In the spec sheets of a speaker you may find what you are really looking for, although these specifications can be manipulated by manufacturers to their advantage. This is either by means of the system used for measurements, or by the way information is presented. The specifications are:

The frequency response shows the range of frequencies the speaker can produced. This figure is always a measure that involves some deviation from a mean within a particular window of error (whether the error is presented or not). Often we say that a speaker has "flat" frequency response within a specific range, where "flat" means a certain error is allowed (±3dB, for instance).

For example, a speaker may show a spec like this:

The way manufacturers cheat is that a speaker with:

response, is given as:

The specification is still valid, but 30Hz may be produced at a level 10 dB below, say 80Hz.

The error margin is typically:

Given in dBSPL, typically at 1 meter away from the speaker, this is an indicator of how loud the speaker can get.

For studio speakers, 100-120 dBSPL is normal. PA speakers are often louder than this.

Again, manufacturers can cheat here. For instance a peak measurement will be higher than an RMS one; it is common practice to show Max SPL in peak, but RMS correlates to our loudness perception more than peak. Also, manufacturers may perform tests using a half-space setup (speaker close to one wall), which will increase the figure by approximately 3dB; so unless the full test specifications are mentioned, it's hard to tell the exact performance or to compare it.

What is crucial to mention is that all loudspeakers are essentially a calculated compromise between various factors like:

In simple terms, this is a measurement of how much work the speaker can perform - the more work, the more air mass it can displace and thus the louder the output will be.

But there are many other factors that will affect this. The class of the amplifier design affects the efficiency of the amplifier, thus with some designs you can get higher output levels with less input power.

To reproduce a particular frequency, all that a cone needs to do is oscillate at that frequency, regardless of its size.

There are many tradeoffs between the two. A small cone with high excursion will require less power to move, but it will also exhibit high distortion level and low efficiency (due to reduced acoustic impedance) compared to a bigger cone with lower excursion.

It is important to notice that the task is to produce "Loud Low Frequencies" - so the cone size also relates to output levels. That's why iMax theatres employ momentous subs, whereas the dubbing theatres in which films are mixed employ smaller subs.

But this is an over-simplified explanation. Practically, each manufacturer tweaks these two variables together with many others, like magnet size, cone depth and the cabinet (enclosure) design itself. See this link for more.

But you can say that bigger cones allow a more efficient low-frequency reproduction.

As you still seem to wonder about differences in sound between different speaker sizes:

The speaker diameter is not directly related to how much bass you can get. Most important for that is the cabinet size: without a cabinet, for any speaker most of the air will just "flow around" from front to back vice versa, if given enough time; so some distance away you basically get only high-frequency ripples. It's the cabinet's job to prevent this, which roughly speaking requires that any free-air path from from to back of the speaker is longer than the wavelength of the sound you'd like to hear. In principle, you can then achieve a fine bass response by mounting an 8" speaker in a wardrobe-sized cabinet.

The reason this isn't usually done is that it's much harder to build a small speaker with high wattage than a larger one (for similar reasons to why it is easier to build a truck engine of a given power than it is to build a race car engine with the same nominal power); the numbers you've quoted reflect this. And since music has most of its energy in the bass range, you need a lot of power there, so you'd need a lot of small speakers. A large cabinet will fit a lot of small speakers, only, these together will generally be more expensive and heavier than a single large one.

Still, this route is actually taken for some applications; for instance, most electric bass players prefer their "refrigerators" with eight 10" speakers, rather than two 18" ones of the same power. And the reason is that small speakers themselves generally have a much more precise response: a large speaker takes some time to even get moving. It's just not able to produce high-frequency vibrations, too much mass. And the larger size means the cone is more flexible to vibrate in eigenresonances (much like a drum head), which affects the overall sound.

PA and HiFi systems solve this problem, as already mentioned, by splitting the signal in different frequency ranges. In the deep bass range, an 18" will generally work fine and cheaply provide the large power you need down there. Above somehing like 100 Hz, you switch over to perhaps 12" speakers with lower power, but more even response to get a clean mid range. And above 5 kHz again you switch to piezo drivers with comparedly tiny power, but very low mass and thus response easily reaching the audible limit.

In addition, you will nowadays typically use equilisation to make up for any remaining response unevenness.

The way I look at it is that the speaker is an air pump. The larger the diaphragm, the more air that can potentially be pumped.

However, the larger the pump, the more resistant to moving the air it will be. Like trying to waft a big sheet of cardboard around, you need strong arms to waft it faster, and if someone asked you to waft the card 2x per second, the stronger your arms, the more control you have to overcome the resistance and momentum.

In terms of a speaker, that means more electro-mechanical force is needed to move the speaker, shift the air and then pull it in the opposite direction again, many times a second. And that means more watts.

Two identical model speakers of different sizes with the same wattage will result in different sound characteristics; the smaller speaker should punch more than the larger speaker and reproduce the recorded tone more accurately. However, you may want to trade tonal accuracy for sound pressure, certainly for very low bass.

Edit: A note about sensitivity. Always look at the sensitivity of a speaker if the data is available. This is a practical measure of how efficiently the speaker converts power into sound. It's not enough on its own, since it might be dire quality, but in general you want a higher number.

It's all about efficiency when it comes to getting sound pressures at a given number of watts.

Guess which one can produce the highest sound pressure in optimal enclosures.

HINT,,, Don't bet against the JBL. It takes orders of power to get from 82dB to 102dB. The ChiCom speaker will require several hundred watts to run with that particular JBL,,,And will fry far before it ever gets there.

These new "500W" (which is almost always peak and not RMS values) require a 10KW diesel generator to drive them where the efficient speakers an be bone crushing at 50 watts.

The dimension of inches more than likely relates to the smallest dimension of the speaker enclosure and basically if you want more power, you need something that is bigger. Here is a section from a PDF document for the XSP_A series you linked to: - 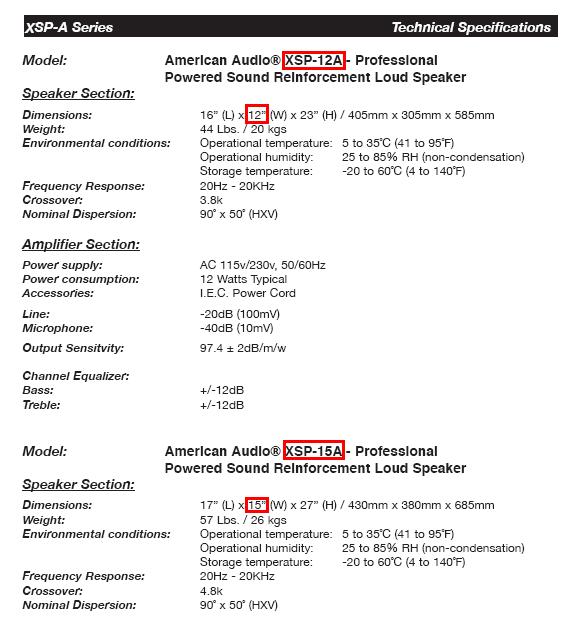 Other manufacturers may also refer to the diameter of the bass driver.

I am by no means an expert, and have only just started "looking into" sound, having to "size" a system for my new car (previous car was bought with sound already installed)... anyway, from what i understand (having spoken with 2 friends who installs sound for a living) is that all things being equal (i.e: same brand, same RMS watts) with the only difference being cone size (10 inch vs 12 inch for example), you will find that the 12 inch is less responsive. It takes power to move the cone up and down, and the bigger the material, the more power it takes - therefore, if the power is the same, the bigger sub will be less responsive. The upside of the bigger sub is it can move a bigger volume of air at a time, which translates into more lowdown bass. Conclusion - the physically smaller sub will deliver a more "punchy" tight (think rock music) bass, while the bigger sub is more suited for low frequency (think hip-pop and house music) bass. To be honest though, i doubt that the difference would be detectable between a 10 inch and a 12 inch though - to hear an audible difference one would have to compare a 8 inch with a 15 inch for example... Thats just my 2cents. Like I said - im no expert and im sure ill be corrected. Also - i know there is allot more to be said on the subject if one delves deep into the differences, this is just an oversimplified view by a novice (me) to try and make sense of a subject that has quite a steep learning curve.

Not the answer you're looking for? Browse other questions tagged speakers terminology or ask your own question.

0
Does setting "full-range speakers" duplicate the lower frequencies?
15
What does the term quantization refer to?
1
Audio interface monitoring with 3.5mm cable and computer speakers
2
Macbook's DAC vs external / in-speaker DAC
1
Can a computer replicate the work that monitoring speakers are doing?
2
Label on speaker reads "120W(MUSIC), 60W(DIN)." What does this mean?
0
What is the technical term for these speakers?
1
What difference does impedance, watts and sensitivity really do?
2
What is the difference between staged limitting and normal limitting?