For encoding mp3s I use the Fraunhofer codec that I think sounds the best. I found it in Nero program and I can record my cubase arrangements in audacity and save it as a wav file in audacity and encode it in Nero. Now it sounds good but I wonder if you can "approve" my process or suggest a better way to do it, perhaps I won't have to use all 3 programs? I should be able to script the mp3 encoding with AutoIt but that is more a programming problem than a sound engineering issue.

Are these settings and methods correct?

You can listen to my stuff at www.soundcloud.com/niklasr 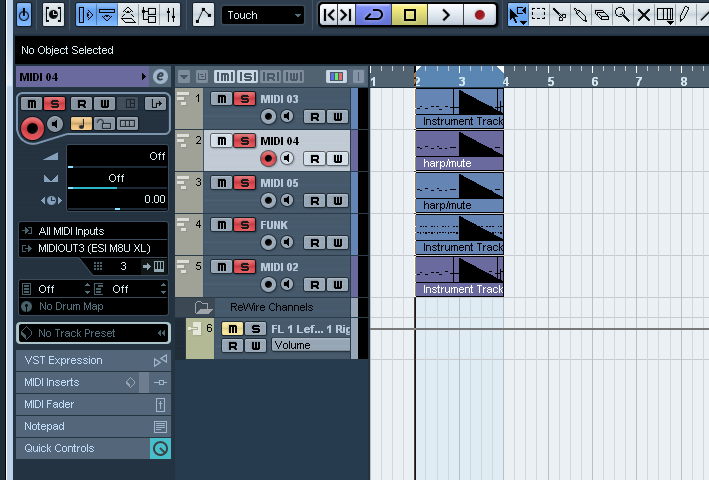 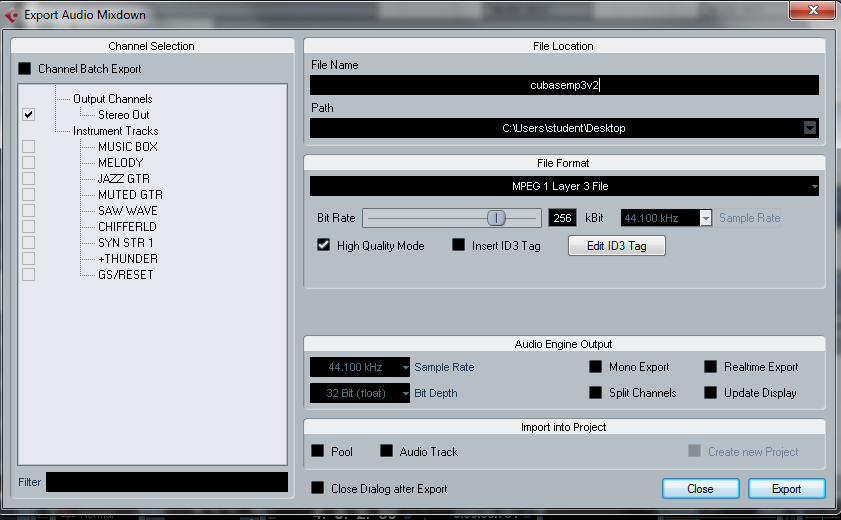 I suppose I can record from the mixer to DAT or from the mixer to the PC, so that I will get the sound of the Mackie mixer which is connected via USB to the computer but I also failed to record digitally which could reduce the noise. I suppose that the noise is component noise from the plexgear soundcard in the analog recording through the soundcard and that I can try with a real soundcard, or without the computer and a hardware sequencer and not use a computer at all since the background noise is computer component noise.

You should be able to create a Mix-Down directly in Cubase, without having to re-record your audio in Audacity and then encode it with Nero.

To export and audio file in Cubase, follow the following steps:

There you should have all the options you need, like File Format, Audio Engine Output and all related settings.

I'm also almost sure that the Fraunhofer encoder codec is included in Cubase by default.

Generally, there are two types of encoder availible: lossless and and lossy compression.

Studio applications should use lossy compression only as the last step to keep the audio quality high. In addition converting from one lossy file format to another lossy one e.g. from mp3 to aac results in a big quality loss. Even more than converting from a lossless to a lossy.

You should also export your wave file in Cubase instead of using Audacity. As the last step before distributing your audio files you can compress them lossy.

Which kpbs setting you use depends on what you want to do with it. In general you should try to use 320 CBR (constant bitrate) that VBR or lower CBR bitrates.

If you want to archive audio files and want to keep the quality high you should use lossless fileformats like flac. This results in a smaller file size than wav files but has still the same quality.

Not the answer you're looking for? Browse other questions tagged mp3 cubase encoding or ask your own question.

1
Why do I get noise in audacity when recording?
2
Cubase blocks other programs from recording audio
0
Re-encoding MP3 reduces quality
4
How to record my Mackie digitally via USB?
6
Audio tweaks pre-encoding for high quality MP3 output
3
Opus vs MP3 (Size & Quality Comparison)
2
Is it possible to mix MP3 Files into an audio mix a long mp3 without degredation?
0
Cubase AI6 and Xonar U7 - weird noise and overdubbing problem
3
How does MP3 and FLAC's encoding work
0
Can I change the MP3 encoder in Cubase Elements 7?