What causes the background hissing in speakers?

If I turn the volume up as high as it goes with the auxiliary cable plugged in, I can get a constant, quiet, hissing noise to come out of the speakers.

What causes that "static"?

It's highly likely that what you are experiencing is a natural phenomeon that is entirely due to the internal electronic circuits within your amplifier. I'm not saying that external EMI doesn't come along now and then and cause noise because it does, however, what you have descibed is "thermal noise" - a constant hiss.

Where does it occur? It occurs naturally in all resistors - components used to set the gain or DC levels within the amplifier. The resistors at the front-end of the amplifier will produce natural noise and because they are at the lowest part of the signal amplification chain, their noise will be dominant. Buying so-called "better" resistors is ineffective - this noise is at the atomic level and is not "type" related.

Mathematically we can predict the general level of the noise and for a resistor this is encapsulated in the formula sqrt(4*KRB).

So if you have a resistor of 1 million ohms at normal temperatures, it will produce a voltage noise, on an audio system of 18 micro volts - your amplifier chain may have a gain of 1000 so this becomes 18mV on your speakers.

How loud is 18mV? If your speakers normally receive 10V (RMS) for normal listening, in dB quantities, the resistor noise is 55dB quieter so if you turn the volume up you are going to hear it. How many resistors could be contributing to the noise - well, the answer is more than 1 so this noise is going to be a bit bigger. Here is a calculator that works it out for you, copy of results below:- 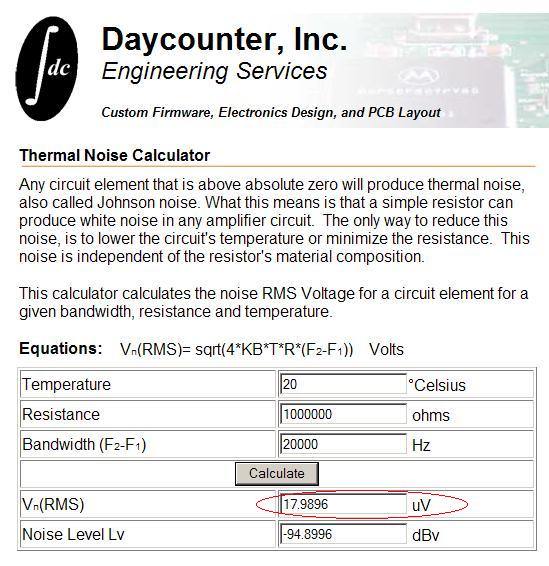 Without your cable plugged-in there may be a mechanism that shorts out the input and thus shorts out the high value resistors that produce noise. The presence of the cable may also cause the internal amps to become activated too. It would be interesting to know if without your cable plugged-in the noise reduced at all - it's also likely that if you terminated your cable in 1kohm (standard impedance for some audio systems), the noise would reduce because the 1kohm shunts higher values and the net effect would be 0.57uV instead of 18uV (a reduction of 30dB). This would be normal operations and the noise would bearly be heard at all.

Is doesn't end with resistors

Thermal type noise also comes from the chip amplifiers inside your amp and although there isn't a formula, each manufacturer of (say) op-amps lists a figure for the equivalent input noise of the amplifier. A typical example of the type of op-amp that used to be fitted is the LF347 - this has an equivalent noise input of 20nV per sqrt(Hz). It sounds a complex meaningless value until you factor in bandwidth and for audio that is 20kHz - take the sqrt of 20,000 and multiply is by 20nV. The result is 2uV; somewhat higher than the noise produced by a 1kohm source (0.57uV) on the end of your cable (should you have connected one) but still a lot quieter than the open circuit cable that allows high value resistors (that typically set amplifier bias points) to dominate to noise.

It's quite possible that changing the op-amp (that is first in the amplifier chain within your amp) to a lower noise type will give great reductions in noise. I've done it myself and virtually made background noise almost silent.

The hissing on my stereo was simply an extension cord wrapped round a speaker cable. It had been used for Christmas lights. When I removed the extension cord the hissing was gone. I tried the turntable, radio and CD player. Only the CD player sounded bad, the turntable and radio sound great. The same CD disc sounds great on the laptop when hooked up to the stereo or played on the car stereo. I'm not going to try fixing the CD player as it's so old. I can also play CDs via the laptop to the sound bar using Bluetooth.

It's noise interference caused by any number of things:

Ever put your mobile phone next to a speaker when its calling out? You get feedback from the transmitted waves from your phone.

Cables inside car dash that carry any power produce electromagnet waves, they also interfere with your audio signal if they're close enough to your auxiliary cable.

Unless you shield your auxiliary cables then your always going to get some sort of interference. The interference signal isn't of a great magnitude, however by turning the volume up your amplifying the audio and any interference that follows.

2
3.5 mm vs RCA for home stereo (both unbalanced)
1
Mixers conducting stereo signal from TRS to line out R/L - are there some? Where to find?
0
Can I plug a balanced stereo quarter inch jack into an unbalanced mono input?
2
Research question 6.5mm jacks connecting to macbook pro headphones
0
How do I 'widen' my PC's stereo?
3
Loud hiss coming from speakers when on line input
2
How do you split stereo to left/right mono for dual stereo speakers?
2
PC stereo out to mixer
1
Acoustic guitar with 2 pickups, but no internal mixer: what to do to make it mono?