I recently downloaded a program called Hear (http://hear.en.softonic.com/mac). It boosts many things like bass and ambiance in the output of your mac and makes everything sound nicer. Well I installed it and now Ableton no longer makes sound. It says that the audio engine is off and to turn it on in the preferences. After messing with every possible setting it still will not work. Every other sound on my computer plays fine and yes I have tried to uninstall hear but nothing works. Please someone help, I love Ableton and would hate to not be able to use it. Thank you in advance

So this is how I responded

since you're on mac check to make sure your audio drivers are up to date. do this by clicking the mac symbol in the upper left hand corner and pick the update option, cant remember what exactly it says (may be different depending on version) but it should be one of the first. after it searches for updates click more detail because it may have updates that you don't want, or not have any driver updates at all. if your driver is up to date try checking your settings in your midi settings. This actually is probably the case as the Hear program, from what you have described, sounds like it has acted as a go between your normal the sound input (any sound the computer would make) and the output (your internal or external speakers). You can find this by going to your applications folder. Applications/Utilities/Audio Midi Setup

from there check to make sure you have your output set to whatever you want the audio to play from. Default is your internal speakers but it sounds like Hear screwed with it. Depending on what version of mac you have it will either be displayed as a selectable option in a drop down or you will just have to doubleclick on the desired output on the left.

If you have tried this and it still doesn't work then open up ableton and go open up the preferences. Go into the audio tab. From here make sure your Driver Type is set to CoreAudio, since I believe this is the only type of Mac built in soundcard. Then make sure Built-In Output is selected as the audio output device, or if you are using a midi-interface, select whatever interface it is you own.

oh wait. after trying all those steps to no avail, click on the Output Config button and select all options available to start off. If you know how this works you can set it to output how you want, but I'd try them all just to check.

Anything I left out that he can try? Or does anyone know anything about this Hear program?

This happened to me and I fixed ableton by deleting the plugin Hear left behind (i believe it's simply called Hear) under Macintosh HD/Library/Audio/Plug-Ins.

As written, the question is bordering on too open-ended, but I'll give the most authoritative answer I can given the circumstances. 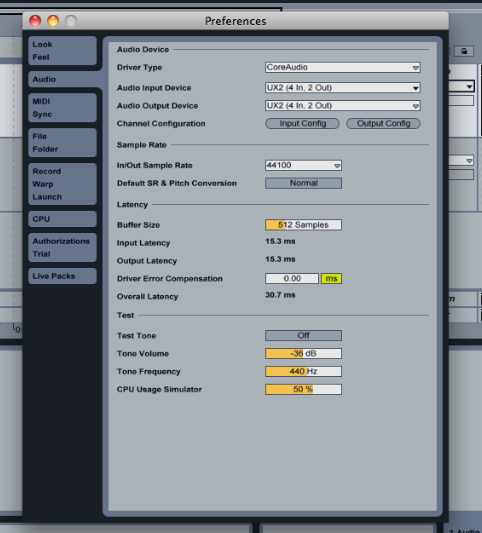 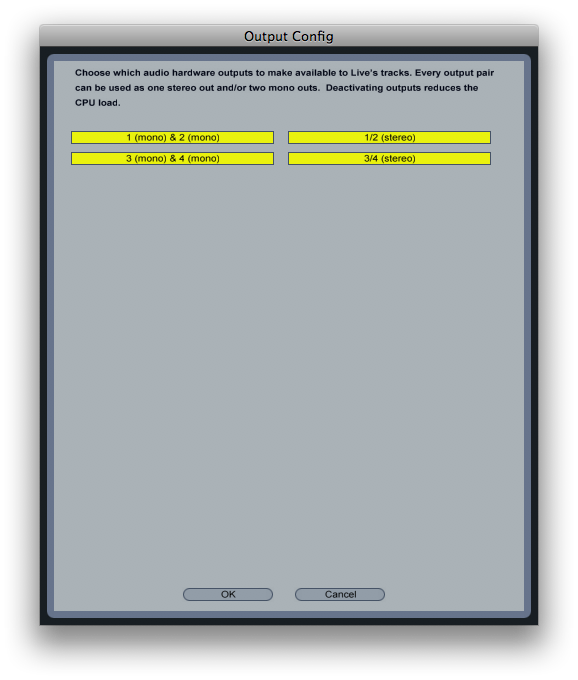 This is all that is generally required. You have suggested all of the major things that are usually wrong in this scenario, so I don't think you've missed anything. Live will deliver the master output audio to the driver for the selected output interface. If this isn't working out, then the problem is most likely outside of Live. If I had to guess, I'd say Hear has done something with the driver, possibly inserting itself and attempting to modify the output stream before it goes out to hardware, and it has some bugs. The Hear website's recent changes list includes "Fixed incompatibilities with certain applications such as GarageBand." so I'd say this is likely.

I'm speculating here since I've never used Hear, but if this is indeed the case, the solution is to either reconfigure or fix Hear, or eliminate it entirely. The user has apparently attempted to uninstall it, but the problem has persisted. This may be down to just figuring out how to cleanly uninstall an OSX driver or program, which is a kind of question better handled at Apple.Stackexchange than here.

Finally, since this is a production site and so it's assumed that this software is being used for production, I imagine it's probably not that good of an idea to use a "bass and ambiance" booster, as that will color the sound you're designing and give you an inaccurate idea of what your recording actually sounds like.

4
How can I record with Ableton Live ? My setup seems to be missing just one part at this point.
3
Audio Interface from Laptop to Monitors/etc
6
Ableton Live Instruments and Effects Have Disappeared From The Library...How to get them back?
0
Map MIDI signals to play custom audio clips
0
How is Soundflower an Output Audio Device?
1
Hear what I'm saying to Zoom h4n pro
0
The best way to get iPad Audio into my DAW?