Can Logic stretch an audio region with a varying tempo to fit an existing, stable project tempo?

I'm currently working on a project where the basic tracks are being laid down by a musician who is, for reasons beyond his control, not able to be in the studio very often. (I'll call him "Fred".) Rather than wait for when Fred can be in the studio to lay down scratch tracks, we can probably make better time if we're able to use some of the band's live recordings as scratch tracks. Then the drummer and I can get started on drums and bass and guitar until Fred can do his parts. (Not the best way to work, since it restricts us to what we did live, but it's better than not getting the album made.)

Unfortunately, this band often speeds up when playing live. The only way I know of to use those live tracks for this would be to chop up the basic tracks, wrestling them into a click-track grid. I've done this a few times, and it's a laborious, difficult process. 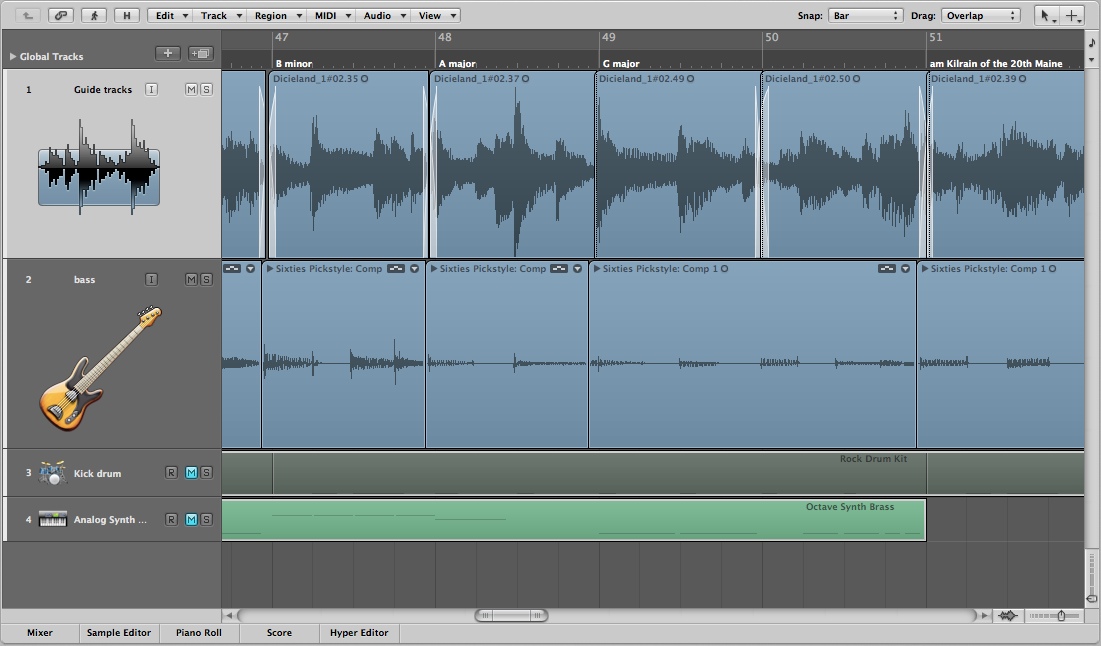 Logic has the capability to take an existing recording and, using a track with a clear beat (or a MIDI track, say a kick drum) adjusting the project's tempo to dynamically follow the recording.

Is it possible to do the reverse? Take a piece of audio and time-stretch it to fit a predefined tempo? The audio doesn't need to sound great, just good enough for musicians in the studio to follow along.

It's been pointed out in the comments that Ableton Live has the capability to do this, with a feature called Warp. The equivalent in Logic is called Flex Time. As far as I know, Flex Time won't work on an entire region of audio like Warp will (I think), but I could be wrong.

To clarify: The original file has a tempo that changes as it goes on. I want to change that file so it all has a single, steady tempo.

I believe you can use the Flex Tool you mentioned in your comment to do what you want. Here is a tutorial explaining how:

Hitting Command + T when you have the matching number of measures selected in the cycle region, the audio clip in the track you have selected will stretch to fit the measure without effect the pitch.

However, I believe this is more easily done in Ableton Live. Download the Ableton Live demo from https://www.ableton.com/en/trial/

The Warp feature does exactly what you want to do.

I don't think any program can do exactly what you want (with large sections of audio at once) except Ableton Warp function, and Ableton's auto-warp doesn't always do it perfect. It is still quite good though and usually gets the job done. It's also much easier than Logics Flex Tool in my opinion too

Not the answer you're looking for? Browse other questions tagged audio-recording logic-pro or ask your own question.

0
Recording in free time in a song with a click track
4
Do Logic Pro X Track Stacks play poorly with Smart Controls?
6
Can I create multiple mixes within the same project in Logic?
7
Change tempo of entire project in logic, and stretch audio to fit the new tempo
5
What is the professional approach to organizing the recording of a full album in Logic?
2
Is it possible to import Ableton Live's sound libraries into Logic Pro?
1
How can I explode takes from a region onto a single track in Logic Pro X?
2
Audio within region randomly shifting out of sync in Logic Pro X
1
Apple Logic with Universal Audio Apollo-Record Wet and Dry Tracks and Headphone Monitor Wet?