How can I simply record, edit, and export one track of V/O?

My sister has a mic, a good voice, and a Mac, and she's getting voice-over work. I'm trying to help her set up a simple home studio, and so far we haven't hit on any combination of hardware and software that hasn't either been unreliable or ridiculous overkill. Her needs are extremely simple: to record herself in one mono track, perform a few basic edits (normalize, insert, cut), and export as either uncompressed (WAV or AIFF) or MP3.

We have tried SoundStudio, Audacity, and now ProTools LE 7.2 with Mbox 2, and the complexity has been comical in the extreme. The last straw came when, after recording 50 minutes of material, she tried to output her work as a WAV file using the Bounce command, and learned that it would take ... 50 minutes! (I now understand why, but that's not the point.)

Half of the battle has been getting an A/D converter box that is DIRT SIMPLE to use (prior to Mbox we were using a "Firebox" I think), and getting the Mac and audio software to all be in agreement as to where the sound is coming in from. The other half of the battle is finding audio software that is robust, simple, and can work with the hardware. I'd hoped that a hardware/software solution like Digidesign would solve the integration problems, but it hasn't really made the job easier, and working out all the OS version dependencies was completely maddening.

It occurs to me that investing in a USB microphone might eliminate the hardware complexity. If so, then it might be possible to use it with nearly any audio software, right?

If someone can suggest a good, minimal solution, I'd be grateful.

I would try WavePad, it has worked for me perfectly in the past. But now I use Final Cut/Logic Pro, which I would also recommend trying.

SoundStudio used to be a lot simpler in previous versions. Similar to Audacity, but native for the Mac and a little less complicated. I still use that old version when I don't need multitrack capability, but both the new version and Audacity can be a bit complicated.

I would take a strong look at Fission. Rogue Amoeba is a great software company that makes excellent Mac audio apps. It might be just what you're looking for in terms of the balance between simplicity and feature set--VERY Mac-like.

The SIMPLEST hardware solution given the circumstances you describe will probably be a USB microphone, such as the Audio Technica AT2020-USB. Pro-grade microphone, "dirt simple" USB connector.

Configuring your audio interfaces on the software end shouldn't be all that confusing. Here's some pointers that might help you out. Every audio input or output your system has access to is presented in the exact same way to the system and your software. You can view available devices by either going to System Preferences->Sound->Input or Output tabs or by opening the Audio MIDI Setup utility. (See /Applications/Utilities/Audio MIDI Setup or just Spotlight search it.) 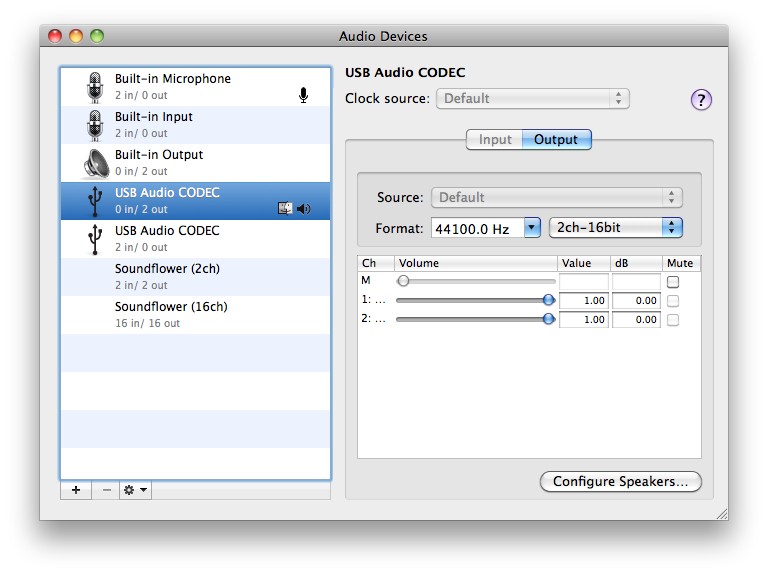 From System Preferences or from the gear icon under the list you can select which device(s) to use for default input, playback, and system output. HOWEVER: Any application specifically used for audio processing is going to have its own means of selecting these interfaces that will supersede any selection made in System Preferences or Audio MIDI Setup. In most Mac-native apps, this selection will be somewhere in the application's own preferences. Apps like GarageBand, Sound Studio, even iChat and Skype have this device selection in their preferences.

To summarize, the simplest "step 3" after the first two steps of acquiring hardware and software is to simply find the preference in your software that lets you select your audio devices, and then choose the one you want to use for input.

Edit:
GarageBand '11 can do all of the recording/editing/exporting, but it's geared towards making music with loops and easy exporting to iTunes, so some things are going to be a little less obvious. There actually isn't a function to select a portion of audio waveform, but you can achieve the same thing by splitting tracks and automating track volume. It's got an auto-normalize function too. You should experiment with it to see if it'll work for your purposes.

There is always going to be latency when converting from analog to digital, and how much depends on the quality of the A/D converter itself. The MicPort Pro is obviously a very high quality converter that has an analog headphone jack right on it that taps into the signal before it is converted, but there will still be latency before it is processed by your software. Garageband can monitor any source, but that is all happening after the A/D conversion.

You may want to check out Blue Microphones; the Yeti is a USB mic with a built-in headphone jack for monitoring, and the Icicle is a cheaper XLR-USB interface than the MicPort Pro.

If you are just doing voice over, what about recording to a Zoom H4n or something... then you have some field recording options as well.

4
How to record one or several celli?
1
Simple multi-track recording to a computer without tons of hiss?
2
Highly Directional Close up Microphone
4
Software that actually produces instrument sounds
0
Recording 2-6 lav mics to a Mac with a Behringer UMC1820?
1
How can I record sub-bass frequencies?
1
Hardware recommendations to record two separate tracks but keep them in sync over long session? (1st from local microphone + 2nd incoming from Skype)
0
What do you call the problem with this audio from cassette tape, and how do I fix it?