How to record (voice+guitar) on a MacBook? USB sound card?

I have a couple e855 Sennheiser mics and 1202-VLZ Mackie mixer. When my son was visiting recently, we connected the mics+mixer to the stereo line-in of my PC desktop and captured some decent recordings of his voice+guitar with Audacity. He would like to take the mics and mixer with him so he can record at his place, but he has a MacBook which does not have a line-in.

The most obvious solution is to get some kind of USB soundcard, but I'm not sure what all I should be looking for, and I am having trouble finding soundcards that specifically known to work with a MacBook. I was hoping you might recommend hardware options and volunteer any recording advice relevant to this particular situation. I would prefer to start with lower cost options (under $100 if possible).

I contacted Creative asking about their X-FI products and they said their only USB product that works with Mac is the Sound Blaster Wireless.

I'm assuming that this MacBook does not have a firewire port, so you're limited to USB.

An external soundcard for recording is usually called an audio interface, and you may have more luck searching using this term. I usually start with major site known to carry them, such as Amazon, Musician's Friend, Zzounds, or Sweetwater. There are many such sites, but these are some of the larger ones.

Since you've already been recording a mixed signal through a PC's line in port, I'm presuming that:

This means that you don't necessarily need more than two channels (since you're only recording stereo), and you don't need preamplifiers or XLR jacks, since you've already got the mixer.

Ordinarily, shopping recommendations aren't a good fit for this site, but given the assumptions above, I'd have a hard time not recommending a Behringer UCA202: 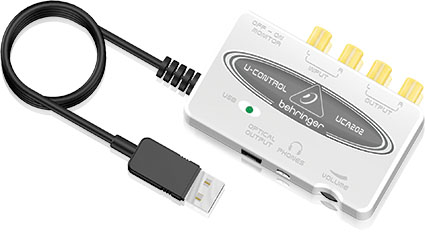 It not great (stero in and out, no preamps, so-so brand), but the one I have sounded better than any of my computers' line-in ports up to that point, and it's generally found new for around $30 US. It'll get you going for cheap and I can confirm that it works on both a G4 Mac Mini and on last year's Macbook Pro. It is class-compliant so you do not need to install drivers.

But if you want something a bit better but still in that range, here are also a variety of $100 interfaces available from many manufacturers with various improvements (better quality, better preamps, more features, whatever) but I can't really make a recommendation in that space that won't be irrelevant in a few years(and therefore not really useful on this site). I recommend going to any of the sites I mentioned above, or any like them, and browsing the "audio interfaces" section, sorted by price. Take the ones whose qualities you like and read reviews from people who have used them.

Once you've got an interface for the MacBook, the recording process should be exactly the same as it was on your PC.

7
how to record wind?
0
Remote recording in studios?
2
A very good 2 tracks sound card?
3
How to record the sound of an acoustic guitar with a magnetic pickup?
1
What' is the best piece of hardware to use for recording DJ sets?
1
Receiving sound from a startech 7.1 usb external sound card with spdif digital audio drivers
0
USB recording and RCA Stereo recording, which of them is better?
0
USB sound card not detecting Shure mic
0
How to record voice and guitar with Zoom H6