My band is playing this weekend, and the drummer has decided to bring a larger kit than usual. We're planning to record the gig using a multitracker with 8 mic pres, which gives us three drum mics. We now have to come up with a way to mic it for recording. Room sound should be sufficient for the live audio.

Here's the kit he'll be using, as seen from overhead: 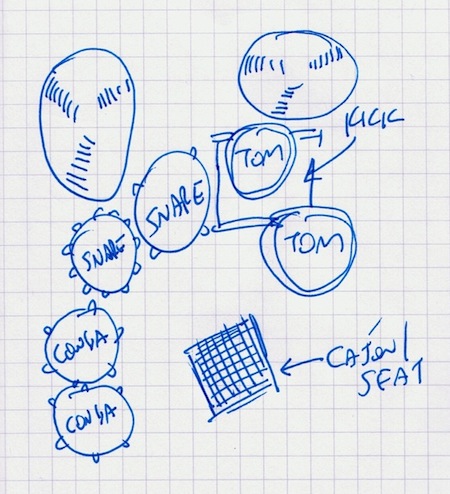 A cajon is, for those unfamiliar with it, a box-shaped piece of percussion you sit on while playing, so it serves as the drum stool. It's a huge part of his sound, so it'll get its own mic.

As you can see, there are also two snares and two conga heads, as well as toms and cymbals.

Since the cajon is the center of his sound, it'll get its own mic, an SM57 placed behind it on a short gooseneck floor stand. I reckon it'll also pick up the kick drum pretty well, since it'll be so low to the ground.

The obvious move will be to complement this with an overhead mic to pick up everything else. If I go this route, should I use a condenser mic? (Amplifying the drums won't be an issue in this situation, so feedback from a sensitive mic isn't a problem.) Or am I better off using two SM57 mics, maybe one over the congas and one over the snare in the middle? Or perhaps a stereo pattern way overhead? (Our booms probably won't go that high.)

The drummer will also have a vocal mic, which will almost certainly pick up a lot of snare. So perhaps I should concentrate on the cymbals and toms for that third mic?

I'm concerned about stage space. I think we have a couple of hours for setup for this show, which will be four hours long - storage space on my laptop my be an issue, so fewer tracks means a bit of a space saving.

Since we have no plans to do overdubs with this recording, some bleed isn't a terrible problem. Avoiding thin, washed-out sound is the goal.

Given all this, what are my options? How can I get a clean recording of this setup, with a minimum amount of mics and setup?

I'd definitely use the Cajon+BD+overhead route, with a condenser microphone for OH (cymbals and percussion never sound nearly as clear as they should, when using dynamic mics). The main possible issue is that the snare might not be powerful enough, but it should be ok if you align the microphone well. As an example for IMO astonishing drum sounds recorded with only two microphones, see this YouTube artist (he explains his setup here). In your particular case, you'd probably best put the OH behind the congas, pointing past those on the snare.

Yes, of course the snare will also be quite present on the vocal microphone, but in my experience what sounds loud on such a microphone track completely drowns in the mix anyway. The cymbals usually come through best, but without the necessary presence. So I wouldn't count on that.

To avoid that thin, washed-out sound the most important thing is to have nice dry signals of BD and Cajon.

Not the answer you're looking for? Browse other questions tagged live or ask your own question.

1
How to deal with a reverby room...
1
over my head: looking for an inexpensive way to mic both my flute and violin for live performance with mic'd acoustic group?
1
Simple recording for live broadcast, crowd mics, compression configuration, etc
2
Setup for live wedding performance
3
Setting live levels without a proper monitor
5
Does anyone have any experience with available RTA software packages for live venue application?
1
Rechargeable batteries for wireless mics?
0
Getting started with live foley work to movie picture in a small room
3
How to input sounds live during a podcast