How do I extend the keyboard range of certain NI instruments?

There is certain keys above C6 that I would like to play, but since the instrument wasn't programmed to contain samples on those keys, they haven't stretched them out beyond that octave.

I'm not too worried about the impact of quality, I just want to learn how to stretch notes in its intimidating instrument editor!

Although this is an answer that depends on another software to solve this problem, here's the approach I took for the time being.

Since my host program that I'm using is Ableton live, I grouped the Kontakt player so that it plays on channel #1 of the combined instrument.

Then, I recorded (in Session view) the output of the highest note in the Kontakt instrument by holding the note down for a few seconds (that is, for however long you need to capture a couple or more rotations of the sound's "evolution", characteristics, timbre, etc.)

Once recorded, I dragged-n-dropped the Audio Clip under Channel #1 so it creates a new Simpler on Channel #2 of the combined instrument. I then Right-Click the Simpler to upgrade it to a Sampler.

I setup the combined instruments' keyboard ranges so that Kontakt only goes up to C6, and the Sampler starts at C#6 to all the way to the end (although yes, that will give you very unrealistic sounds from C7 onwards, or even before that octave).

Then, it's important to set the root key of the Sampler so that it recognizes C6 as the "normal" pitch of the sampled sound. Anything else you play in the comprised notes range will simply be pitch variations of the C6 sample.

If you require the instrument to loop infinitely as you hold the key (passed the length of time the sample was originally recorded) then you can do so by selecting the loop button (with the two forward arrows) and cropping up the region where you want the sample to loop. The START and END of where the sample is "triggered" doesn't have to be exactly the loop regions. The START can be a little earlier from the LOOP-START point, and the END can be a little later than the LOOP-END point. You also may want to have your loop "crossfade" to make the transition from loop-to-loop smoother and eliminate potential clicks or pops (although, you really should take care of this by selecting zero-crossing points). 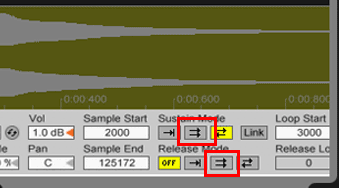 You may notice that some instruments sounds like they boost supersonic frequencies when they are pitched-up (even by a single semitone), which can be dealt with by inserting a gentle LP EQ filter on the Channel #2 containing the Sampler. There may even be a way to do this directly from the Sampler by using the Keytrack feature to inversely lower the amount of frequencies cut-out as you play higher and higher notes. This can be a subtle or stronger amount depending on how much high-frequencies normally occurred in the sampled sound.

Hope this can help others stuck in the same situation :)

Not the answer you're looking for? Browse other questions tagged midi keyboard programming kontakt or ask your own question.

3
How does an electronic keyboard sustain pedal work?
2
What is the midi format used on the Yamaha PSR-e423 portable keyboard?
2
How is MIDI used with a keyboard?
5
How can I lock my keyboard?
11
FL Studio: How can I change the instruments of an imported MIDI file?
0
How do I fix my keyboard pedal?
0
FL Studio: How to register the actual keyboard sound?