I was recording gameplay of Mass Effect 3 and for some reason the mic input is way louder than the game volume. They're both recorded on the same track but it has really loud parts and really quiet parts, is there any way to make it so that it's all closer to the same volume?

I normally use Audacity for audio editing but am willing to try other free alternatives.

If I've understood you correctly, the basic problem is that you have both your recorded source audio (your game, in this case) and microphone input recorded together, which is to say, on the same track in Audacity. Ideally, you'd have those on two separate tracks, so that you can adjust their volume (or other properties) separately.

You may want to look into ducking your game audio so that it automatically lowers in volume whenever you're talking. I don't know if you can set this up in Audacity, but you should be able to do this in most DAW programs with a bit of diving into the manual. Most of those packages aren't free, though.

Failing this, one way to bring the quietest and loudest parts together on the same track is by using a compression effect. What this does is proportionally reduce any volume louder than a certain level. That point is called the threshold, and amount of reduction is called the ratio. A 3:1 ratio, for example, means that any audio above the threshold will be one third as loud as it would be without the effect. You can use this to lower your voice's volume. You will, however, experience a bit of a "compressed" sound to it, which is simultaneously more of a "studio" sound, but it brings with it some mild distortion. Adjust it to taste.

Most DAWs (digital audio workstations) have a normalize feature that'll even things out. If you're doing analog, you'll do the same thing, but patched through some kind of processor in your mastering suite.

Of course, this is all predicated by your audio being completely usable and not clipped. If you got strange anomalies, you may need to fix those in post before normalizing.

If you were more exact about what type of audio, how it was recorded, which tools you're using, and maybe a clip of the differences, I could add more specific details. 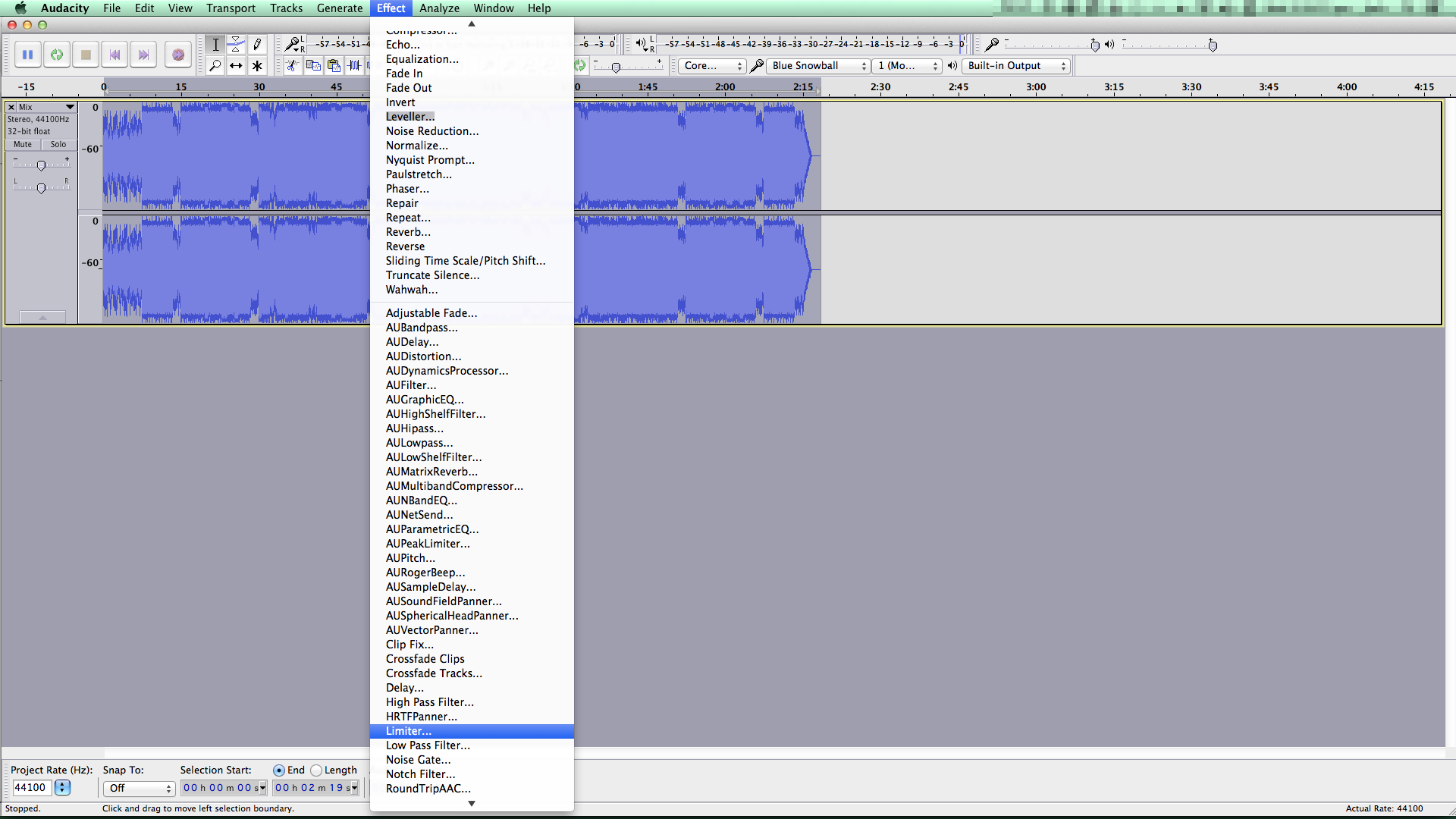 and adjusting the settings to amplify the entire recording accordingly whilst limiting the output to 0dB. If the option of 'Limiter' in the effects menu is not present, you could alternatively usethe 'Leveller' (found in the same menu), but this tends to cause distortion.

You couldn't really do ducking because they are on the same track but that would be a great idea if they were on separate tracks. Normalizing would just make it as loud as you set it to normalize to and still keep the same unbalanced mix. Limiting could be more helpful with a low threshold or alternatively compressing with a low threshold and playing with your ratio with depending on content about a 2-millisecond attack and a 200 to 500-millisecond release. Play with the ratio until it sounds okay. Of course, each compression plug-in has different characteristics even with these settings and some sound much more natural than others and don't add a bunch of color changes.

Directly to your title you are looking for a reverse gate plug-in something like the Waves C1 could do this.

1
How can I make my recording sound louder in Audacity?
3
In what order do I make edits to audio in a video clip?
0
How do I make my AutoHybrid louder? (connected to my PA system)
3
How do I record audio and video screen-capture for Tutorials on DAWs with ScreenFlow?
7
How do I use Audacity to make two tracks match volume?
5
Mastering for Android
2
Mixing and monitoring separate livestream audio channels
0
"Compress" an AIFF file?
1
How to split a recording to music and talking parts