Does this sound wave of a voice-over track look normal?

I got some voice over files today from a new studio, and my co-worker was confused as to why the sound wave looks like this.

His concern is that the wave should be pretty even above and below the -∞ line, but the lower part of the wave appears to be half-peaking along a consistent line.

Anyone know what's happening here? Is this normal, or a result of faulty/poor equipment? 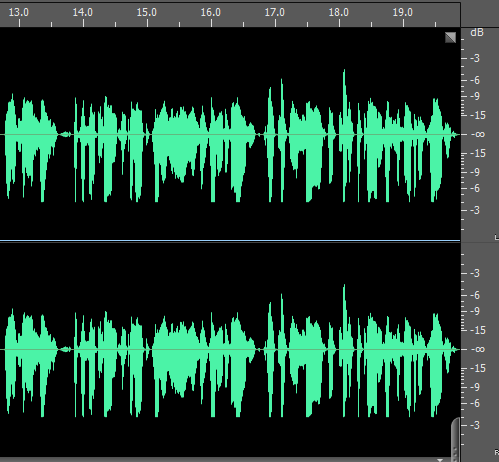 EDIT: as a reference, here is how we would expect a wave to look 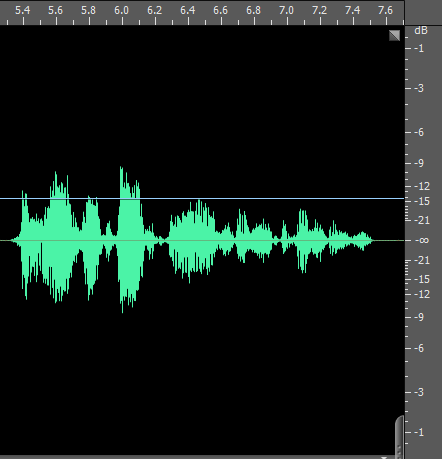 There can be multiple reasons for such a waveform:

As I said, it is disruption of the phase relation between the harmonics that usually prevents asymmetric waveforms. The phase relations are changed in any normal equalizer, so it's quite possible that the waveform will look perfectly normal after EQing (especially low-cutting). If that's not enough without making it sound bad and you're still worried about the asymmetric waveform, you can also mangle the phase relations without affecting the sound, by means of an all-pass filter. You may need more than one, set to different frequencies in the range 80-800 Hz. Other things that will probably mend the asymmetry:

How very interesting! I do pro voiceover, and my raw trace looks asymmetrical when I compare it with the work of peers (I can't check their original recordings of course). First time I thought about it was when I happened to step behind a figure of eight ribbon mic and noticed a quality change along with inversion of the asymmetry.

Some BBC research of long ago found that male voices in particular can be asymmetric by up to 8dB, and in USA the mighty Robert Orban among others used phase rotation, or scrambling if you like, to ensure maximum modulation on AM. In Britain it probably happened anyway through the BBC’s then use of enormous numbers of transformers one after another in the national broadcast chain! I asked my tutor: he said 23 and counting.

Back to my ribbon: With the help of phase-swapping line transformers, I confirmed my equipment was indeed adding distortion and found it preferred the mic input to be phased such that some cancellation could be achieved. Not very nice!

Now, with a completely new set of equipment there’s no audible distortion, and quality-wise it doesn't care about polarity, but the loppiness persists. It looks much less obvious if the bigger peaks go upwards, so I have set the desk to do that, although you could just use polarity reverse in the software.

As leftaroundabout said, one remedy is peak limiting and yes I do that. Just enough to trim the infrequent tall spikes. Which are all on one side. Looks like a crew cut.

I have noticed this same phenomenon when recording drums using an Shure SM-58 microphone. I only tend to see it during the louder parts, so my best guess is that the sound pressure is so great it is pushing the diaphragm of the microphone in more than it is being pushed out.