I have an audio file (Music + Vocals) and I have an instrumental (Music Only). Is there a program or some way I can take the music file and subtract the instrumental leaving only the vocals? (Full Song - Music = Vocals Only)

Audio waves are additive, so if you play back the inverse of a waveform against the original waveform, they'll cancel out to nothing.

So if you have the exact instrumental, you can invert the waveform and play it against the original recording, which will mostly leave only the vocals intact. It's not the same as having the original tracks, since there won't be the same fidelity (you're subtracting from the mastered final so there's going to be a bit of loss of resolution) but this should get you pretty close.

You can use a waveform editor like Audacity to do this. You might have to shift one of your recordings forwards or backwards in time a bit to get the samples to line up; this is particularly the case if they came from separate sources that may have been encoded separately.

Although this is already answered I made a tutorial on this a while back also showing how you can do this in Ableton Live. 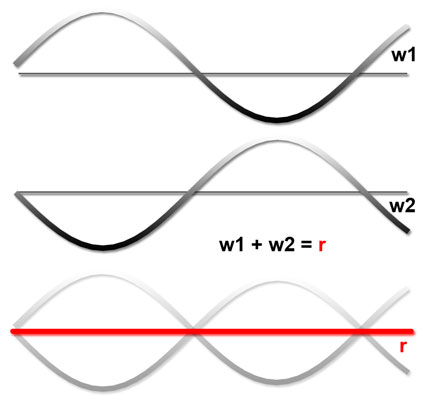 There's a VST plugin to do basically this, called Extra Boy. I haven't tried it myself, so can't vouch for its effectiveness.

I find the hardest part of this is to actually fit the song exactly against each other. In a case where the song is not exactly the same for example an 'instrumental' version of the same song in the same album, it's already hard. Also in cases where you want to subtract the music from a video, it's practically impossible to line up the music. A video might even cause the music to be clocked slightly differently after being edited/converted. The only time it worked perfectly for me was when I used the same music compared to its inverted version.

6
Preserve embedded album art when converting from .flac to .ogg
1
How to get vocals from song using original song and remix using official vocals
2
How To Remove the Vocals from a Song? Basic methods won't work
0
Solo Audio Track with DIfferent meter reading from Master?
0
Right channel minus left channel?
3
Removing vocals using multiple versions of the same song
1
Why would different releases of the same song sometimes be out-of-sync?
5
Show the differences between two similar audio files using graphical method
0
How to find difference between 2 versions of the same song (one longer than the other)?