What's the difference between dynamic and condensor microphones?

When someone talks about a dynamic or condenser microphone, what do they mean?

How do these classes microphones differ, and are they used for different things?

Are there any more subdivisions of microphones within the spectrum of dynamic and condenser mics?

The quick and dirty explanation.

There are many other types of mic eg electret, ribbon, capacitor etc but these are not generally considered part of the condenser or dynamic divisions even though for instance elecret is actually a type of condenser mic. In stereotypical terms when we say dynamic we tend to mean a standard stage mic and when we say condenser we usually mean a high quality studio mic, though in truth it's a bit more complex.

Edit: Also should have mentioned that there are both large diaphragm and small diaphragm condensers.

As Dr Mayhem says a dynamic mic moves a coil in a magnetic field to generate the electrical output, and condensers are based around changing capacitance of the transducer. Condensers require a pre-amp and power. The power for this can either be supplied by an internal battery or by 'phantom power' a DC voltage (usually between 9 and 48V) output by the mixer or whatever the mic is plugged into.

Dynamic mics are cheaper and more robust than condensers but are generally less sensitive and not as good at reproducing high frequencies. I would happily use a either type for vocals for example, but for a flute I would if at all possible use a condenser. There are other types such a PZM, but dynamic and condenser are the most common.

Both dynamic and condenser mics can be purchased with different pick up patterns. These patterns describe which direction the microphone is most sensitive in. The most common ones are (in no particular order): cardioid, hyper-cardioid and omni-directional.

Omnidirectional is the simplest to explain as it is equally sensitive to sounds from all directions. So would be good for recording general ambience for instance.

A cardioid mic is most sensitive to the front and sides as described by the cardioid shape shown below, and is a good general purpose mic.

A hyper-cardioid pickup patten isn't as wide and has a rear lobe. Good when lots of instruments are close together and you want to mic them separately. 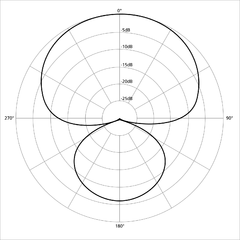 Super-cardioid (similar to hyper-cardioid, shotgun (good for long range) and figure of 8 (good for 2 people sharing a mic) are also common. Most mics have a set pickup patten but mics such as the AKG C414 allow the pickup pattern to be changed using a switch. This change is managed by using 2 diaphragms and changing the ratio of each one in the final output.

Dynamic microphones are basically loudspeakers in reverse - instead of a voltage in an electromagnet moving a cone, sound waves move a magnetic material in and out of a coil, generating electricity. They are robust and have high gain so are used on stage a lot.

Condenser microphones are a capacitor where one of the two plates moves with the sound waves. These usually need a preamp but are cheap and have a good frequency response.