What is the scale type called used on Tonematrix?

I am making an application similar to Tonematrix, and I was wondering what scale it uses, and how it generates its sounds. So here's a few questions I need answered that I haven't been able to find answers to on my own.

Is it chromatic? What frequencies are used? And what happens to the frequency if (for instance) a 400 Hz and a 800 Hz beep are played in the same track at the same time to the overall frequency? Is the resulting frequency 1200 Hz?

I'm such a noob at audio in general although I do have a sense of music. I'm a good programmer though, and I was hoping that you could help me.

Edit Here's a link that might help. Somebody deciphered the math behind it.

how it generates its sounds

This depends on various factors. It can use samples, or a basic synthesizer algorithm, a table etc. Only the authors will know for sure. To me it sounded like low-resolution samples (or heavily compressed mp3), but my mini laptop does not work well for sound analysis.

How to technically generate the sounds depends on which platform it uses and what that platform offer to generate sound. For Flash see this documentation for ActionScript.

From what I can hear it uses standard chromatic table.

What frequencies are used?

Here is a table with standard frequencies.

Basically it doubles the frequency for each octave up and each octave has 12 steps. The math is simple.

And what happens to the frequency if (for instance) a 400 Hz and a 800 Hz beep are played in the same track at the same time to the overall frequency? Is the resulting frequency 1200 Hz?

No, you will have two different frequencies played at the same time. This is how chords and poly-tones works.

The amplitude however will be affected and your software you need to take height for out-of-range amplitudes to avoid distortion (cropped tops/bottoms).

The reason for this is that if you mix two samples that have the same sign, f.ex. positive, they will add to each other and if you don't average (or use another method) to reduce the sum, the sum may exceed the max value of whatever signed bit-range you use (16/24-bit etc). You can for example use Float internally and implement a look-ahead routine which compress the audio (as in amplitude, not file size), but explaining that would be out-of-scope for this answer.

Besides from that, the program you link to works as a standard running step-sequencer where the resolution is quantized to 16 beats which gives you 4 bars with a 4/4 signature. Pretty standard in other words.

Update: to show visually what happen when you add two waves together we can take a look at this illustration - 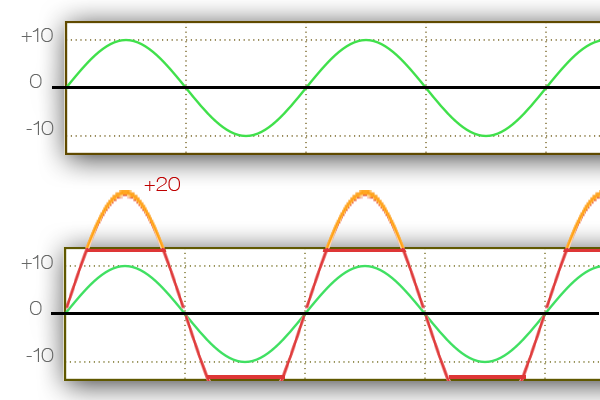 Lets say we have two waves as the first green one (these are identical but they don't have to be).

When we add these together their amplitude values, in this case ranging from -10 to +10, are added together. As they both have the amplitude at max at the same location the resulting sum will be +20 (or -20 for the negative ones) exceeding the max allowed values in this case which happen to be -10 to +10. instead of getting a new wave as represented by the orange top, the wave form is clipped shown with the resulting red wave (notice the flat red lines top and bottom). This is called clipping and is neither good for loudspeakers nor ears.

To avoid this we need to either reduce both waves to half the amplitude ("volume" is technically wrong as it's a logarithmic scale, so lets use the actual value of the amplitude) and then add them, or use an algorithm that can analyze them in a more complex way to give a result that won't sound like it has low volume (as it would by just reducing the amplitude to half on two different waves). Such analysis can be performed by the means of a compressor and limiter.

Bottom line is, that adding waves is just about the simplest of math (adding the values together). To avoid clipping you need to make sure that math works within the bounds of a defined range.

Not the answer you're looking for? Browse other questions tagged audio or ask your own question.

5
What type of information can I get from the waveform and the spectrum of audio?
4
What is a stereo pair of samples called?
0
What type of plug-in is Fruity Loop's Gross Beat?
3
What is it called when there are several channels of audio playing over a video?
5
Fix for terrible "Hard Drive Noise" Audio Interference?
5
Is it possible to raise/lower the volume of different voices?
2
What type of filter is the "French Low Pass Filter"?
0
What's the name for the type of x-axis scale used in frequency graphs?
0
Is it possible to make this kind of voice-modulation setup?