Why is my PC microphone so quiet?

When recording with a Hama DM-65 dynamic microphone on my PC, the recording is barely audiable over the background noise. Here's an Audacity screenshot where in the highlighted part I'm playing an instrument, and in the other part I'm making no noise: 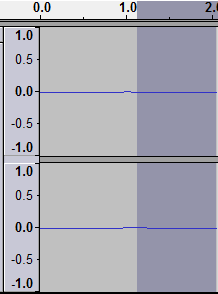 I'm playing a foot from the microphone with recording volume set to 95%. Enabling microphone boost amplifies the background noise too: (I start playing at the vertical line, and the microphone is recording left-only so the bottom waveform is all noise) 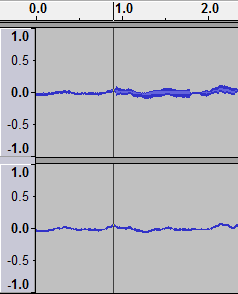 Why is the microphone input so quiet and how can I improve it, short of buying an expensive microphone?

First of all, recording using the sound card on your computer is generally fairly noisy. Depending on the quality level you are going for this may be OK. I recorded 2 CD's of piano instrumental music using a keyboard plugged directly into a medium quality sound card and they came out just fine (with just a bit of hiss in the background during the quiet parts).

Your microphone is probably OK, but in order to raise the recording level of the microphone you will need some sort of preamp to boost the signal before it reaches the computer.

Another solution would be for you to get a USB recording interface for your computer. Many have preamps built in and, for the better interfaces, the sound quality is far superior to your average sound card. If you go this route, you should probably get a mic cable that has XLR connectors on both ends (I have a M-Audio interface that only has a preamp for the XLR connectors).

Are you using the correct input on your sound card? If using an integrated sound card, you will usually have Line Out (speakers), Line In and Mic In. (Delving into signal theory a bit, because it is relevant: the industry reference level is 0.775 Volts, aka 0 dBV; Professional Line level is ~1.25 V or +4 dBm; Consumer Line Level is about 0.316 Volts or -10 dBV; Mic level is usually ~40 dB quieter than pro level (this can vary though), between -40 to -56 dBm.) If you're using the wrong input you will likely hear nothing (or a remarkably quiet sound, even if you shout at the mic from 2cm away).

Another consideration is your microphone - unfortunately, it's not great. Hama themselves rate it as "90Hz – 10kHz (frequency response), impedance of 600 Ohm and sensitivity of -76dB". By contrast, a Shure SM58 Beta goes from 50Hz to 20kHz and generally has a far higher build quality and sensitivity which results in a higher dynamic range in your recordings before you reach the noise floor).

I also wonder if (if you're using the wrong input) you may also be encountering an impedance mismatch - the Hama mic is rated at 600 Ohm impedance; your sound card's mic input will be rated at anything between 600 Ohm - 1 kohm and (hopefully) be balanced; the Line In is typically unbalanced and has an impedance of ~10 kohm (can be anything up to 1 Megaohm). If you plug a Low-Z (low impedance) device like a dynamic mic into the Line In socket (which expects a High-Z source) your resulting audio levels will be barely above the noise floor because most of the mismatched impedance signal is 'bounced' back by the audio circuitry - this is what may be happening.

Failing that, you may have a physical fault with the connector on the mic, have you tried another mic? I would highly recommend you shop around for a better mic, that Hama has probably outlived its usefulness already (and given its relatively poor tech spec, as they say in audio hardware - Garbage In, Garbage Out... you can only do so much to a low quality signal once it's 'inside the box').

Hope I haven't mystified too much with my answer, I had to revise some of what I was writing to make sure I still remembered correctly from my degree!

One other thing to keep in mind is that dynamic microphone are not always a good choice depending on the instrument. For example, a classic SHURE SM58 is very good for vocal and the reason why is that the mic is sensible for sound really close at a higher volume and it cut all the sound coming from all around. So that's why this mic is very good in vocal live performance. That why you will see singer that use this mic singing very close to the mic, almost kissing it.

In the other hand, a condenser microphone would do a very good job a recording accoustic guitar at 1 feet and it will also record a lot of the ambiant sound (this is often wanted to get a more "normal" feeling to the song).

I never use the mic you a mentionning and I don't know the instrument you are trying to record but if it's specialty is vocal, that may be the reason why it doesn't work well. I would try recording vocal to see if it perform better.

The explanation of Friend of George is also very good.

3
Needing some advice for a small budget sound recording setup...
8
Why are all my recordings fuzzy and quiet!?
3
recording with Shure SM7B is surprisingly quiet
1
What quantity of hiss/muddiness should I expect give various studio setups?
6
How can I record my singing voice the way I hear it?
1
Looking for a compact portable active powered speaker, such as a Behringer 205D, for small live gigs. How can I improve sound quality?
2
Help with setting up audio recording for retirement home meeting
2
Boost volume and improve quality of soft speech from audio track (Dropcam)?
2
Low/distorted signals from headworn microphone