I found this image on the web and I was trying to identify different components in it. Could anyone help? 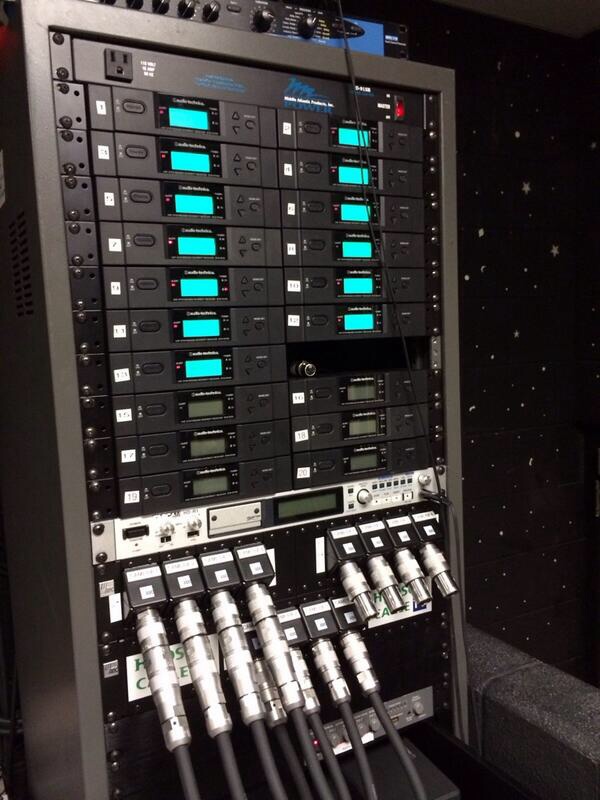 This is most likely equipment for a live use.

Below them I'm not sure what the white unit is, but possibly a recorder based on the layout of the controls. (The black lines are generally protection around the record button.)

Below that appears to be either a patch bay or an output hookup for the feeds coming from the receivers.

The unit sitting on top of the rack is an effects unit and the unit way at the bottom and hidden behind appears to be an older receiver which I vaguely recognize but can't remember the model of.

Those are Triax patch points at the bottom. There are 8 male connectors in two groups in the first row, and 4 female connectors centered in the second row. The female connections receive signal from the camera and feed it to camera control units (CCU's) in a control room somewhere. The male ends are extension points coming from locations around the building where cameras would be deployed.

The male ends are marked 'House cable' and are probably split between two theaters or auditoriums. My bet is that this facility runs four cameras at a time, so they patch any 4 of the house cables to the control room.

The triax carries bi-directional signals between the base station and the camera. Signals include camera pictures, intercom, return video, audio, teleprompter and control data.

2
Keyboard CASIO CTK-5000 to PC Line In
10
Equipment setup for recording a podcast
4
How do below-freezing temperatures affect audio equipment?
1
What equipment do I need to record the audio from my piano keyboard?
2
What is the best, but least expensive live recording setup?
2
Relevance of digital recording and mixing techniques to analogue equipment
0
Record actual piano from Keyboard CASIO CTK-3200 to PC
1
Soundcraft Vi6 audio output issue