Can someone explain 'phase' and related terminology in audio production?

I've looked a lot of places for info about this, and I've never found anything that was clear and satisfactory.

I've been working with various DAW software for awhile and I always run into 'invert phase', 'phaser', and then one that seems really potentially useful, but is unclear to me: When working with the Stereo Tool plugin by Flux, there is a little meter at the bottom that measures phase -> and it ranges from -1 on the far left, and +1 on the far right.

I quickly notice a difference when inverting phase, but it is not immediately obvious to me:

Anyone who is knowledgeable in this field, and can provide an intelligible explanation of this phenomenon would be appreciated by me.

Super simple explanation of the invert button. Imagine a simple sine wave. Thats the solid line in this graph. If you had the invert phase button on a console or use the plugin in your DAW does the same thing, you get the sine wave illustrated with the dotted line in the graph.

Why do you care? If you were to sum these two sine waves you'd end up with nothing. Why? Because amplitudes add up. And when one is +1 the other is 1+(-1)=0. Of course real sounds are much more complex than sine waves. So if you have say for example, two microphones that are out of phase, you will hear the cancelation and/or boosting of certain frequencies and often times you can solve it with the invert button.

Even simpler answer: If something sounds kind of hollow when combined with something else, try inverting the phase. If it sounds better, it is better. 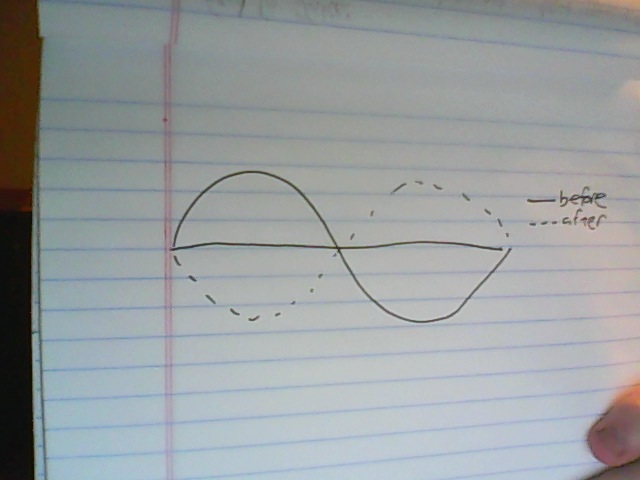 Phase is one of those things that is a lot more complex in reality than it first seems from the theory. Sound waves are transmitted through oscillating air pressure. Electronically, it is captured as a signal that maps the pressure changes to changes in electrical voltage. If you had a fixed frequency wave, it would look like a sine wave going up and down in regular areas of positive and negative pressure. You can even see this when you look at a large speaker and see the cone moving in and out.

So what happens when two audio signals meet? Keeping it simple with a single frequency, it is easy to see that it depends on how the signals are aligned. On the wire, if you have a signal that is at +1 volt and a signal that is at -1 volt and you combine them, you end up with 0 volts. If you instead had two signals that were perfectly lined up, then the 1 volts would be added to each other and you get a much higher amplitude wave.

When listening to a similar situation from two stereo speakers, it gets even more fuzzy because the sound arrives at different times at both ears and the alignment at each ear differs slightly. The spacing of the speakers and the listener also matter for this. The result can be drop offs in SPL at certain spots in a room.

Phase is a measure of the difference in timing between the two signals. Ideally, 180 degrees out of phase means that the wave is an inverse of the other wave. A phase inversion simply flips the signal to try and get it closer in line with another signal.

The reason that each channel has it's own phase adjustment is that it allows either a slight delay, or a reverse of the - and + sides of a signal, in order to make two signals be more in-phase. This is normally done to correct for the problems I described earlier.

The thing that makes it even trickier is that we don't deal with single frequency sine waves. We deal with complex waveforms that have multiple frequencies in constantly varying intensities. Two different samples don't match up exactly and so phase becomes a much more subjective thing to listen for and adjust to minimize the occurrence of phase related problems.

There is analysis methods that help determine if something is out of phase, but in the real world, it's still a rather complex signal analysis task that is often best handled by learning what out of phase sounds like so that you know when to adjust it to minimize problems.

The tool you linked can widen the stereo image of the music and it does this by inverting the signal on one channel relative to the other and adding a portion of the right channel to the left and vice versa. Thus if a particular sound were a little bit "left" it would become "more" left as you increase the stereo enhancement.

The meter you mention gives the user a visual feel for the stereo width of the composite signal and the mechanisms used in the transformation are all to to with inverting phase so that a positive signal becomes negative and vice versa. The meter is trying to show you that the effect is producing increasing or decreasing phase differences.

An old digitech guitar effects unit I've got, on some settings produces a massive wide sound and it does this by opening the stereo field with an inversion on the left channel.

All the above is related to "invert phase"

A "phaser" is something else entirely (although it is related in name and process). A phaser effect goes back to the late 60s; you take your input and mix it with a phase (time) delayed version of the input - this is the first analysis and what you get is some parts of the signal spectrum enhanced (increased) and some parts decreased. The mixing isn't deep (i.e. it doesn't use a sledgehammer) and if you heard the static mix you might not notice the difference BUT a phaser isn't static; it varies the phase (time) of the mixed signal and you get the swishy sound effect it is noted for. The swishy effect is because of the continuous variations - the ear picks that up really easily.

Phase is a measurement of some time difference between two similar waveforms. I recommend you to check book on amazon, called Good Musician by Shadow Producers. There are ALL the most relevant and important terms in the world of music making, so that you dont have such questions in future)

Not the answer you're looking for? Browse other questions tagged audio-recording mixing daw stereo or ask your own question.

7
How to learn about audio recording and production
4
Getting started with Audio Production
2
What is the title for someone knowledgeable in all that is related to sound?
2
Learning how to create, record, mix, and master audio
3
Recording - Can you 'see' if multiple microphones are in or out of phase
3
Can someone please explain to me what each bar of the equalizer means?
1
What books and resources can help me better understand my DAW?
6
How to read and use a Phase / Vectorscope
0
How can I setup my M-Audio soundcard on Windows for multi-track recording?
0
What can I expect from this pc when producing audio?