What is the point of a frequency response higher than 20 Hz to 20 kHz?

According to Dr. Mike Hewitt the writer of Music Theory for Computer Musicians:

"The general range of human hearing extends from about 20 Hz to 20 kHz, although this can vary depending upon the sensitivity of the individual ear".

What is the point, for example, of a pair of headphones like the Sennheiser HD 800 that has frequency response of 8 Hz to 51 kHz? Wouldn't any frequency higher than 20 kHz (give or take, depending on the "... sensitivitiy of the individual ear" as Dr. Hewitt pointed out) be impossible to hear?

The point is to have the necessary frequency response or usual power output requirements well within the nominal spec for the product, thus minimising distortion or other unwanted non-linearity.

With microphones the point is also to provide extended frequency response to recordists who plan on manipulating the sounds later.

With sound reproduction equipment (e.g amps or speakers) the aim is to avoid the edge areas of non-linearity in frequency response.

Finally that way you can be sure that even if the marketing department have asked engineering to measure within -10dB (as opposed to -3dB), the range you're interested in will be intact.

So, still about the ear, but in a roundabout way.

For high frequencies, the answer comes down to the inherent problems with sampling. Up to about 2 times is horrible - aliasing and sampling errors ruin the sound, so for a given piece of music you need to sample at eg 48kHz to avoid this (as humans can hear to 20-22 kHz).

If you are editing or processing tracks though, you need to double again to ensure processing errors do not lead to sampling errors propagating down to audible frequencies.

The difference may only be noticeable to audiophiles, but it is there.

It's interesting to note that the Sennheiser HD 800 is specified as : -

Is it a coincidence that they specify the frequency of 44.1kHz - this is the sampling frequency of digital audio in CDs! It's also quite interesting that there appears to be no published graph of frequency response when tested in the normal way: - 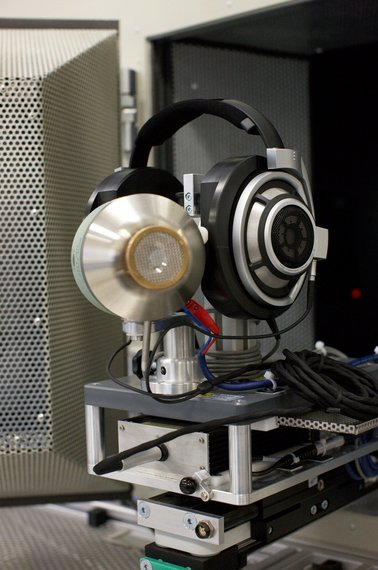 The pictures of the testing are there to be seen but i can't find a frequency response graph that goes above 20kHz anywhere on the web. The ones that I have seen show typical mid/high range anomalies that all headphones seem to have BUT stop at 20kHz.

So, is it marketing hype? I suspect that it is. Having a frequency response exactly specified at 44.1kHz is totally bogus to me. It's trying to impart "stuff" to the potential "soft" buyer that is irrelevant. 44.1kHz (as a signal), sampled at 44.1kHz produces (due to aliasing) a frequency of exactly 0 (zero, zilch) hertz i.e. dc!!

As for the mechanics, there are plenty of mechanical structures (speakers included of course) that have a decent frequency response up to a certain point then it falls away at about 12 dB per octave (error fixed now) - this is a standard 2nd order characteristic of mechanical items like speakers (techy phrase is spring-mass-damper systems).

Have you ever read the instructions on how to use a graphic equaliser??

They say that cutting the volume of the bass sounds can increase the clarity of vocals and indeed higher pitch sounds like flute.

So, knowing from those experiences that lower frequencies can affect higher ones why do you think that stops below or above the Audible range ??

It is still the same air molecules vibrating at a certain speed despite being slower or faster than our ears can hear..

So if you accept that cutting low frequency on a graphic equaliser can make the higher ones sound better... Why not adjusting the ones outside the range of hearing make the ones above that sound clearer.

You might not hear those frequencies but if you consider their effect on the ones your ears are sensitive to, those will change even though you didn't directly change that exact frequency but rather the one beside it.

A specification for equipment doesn't mean that no sound is produced outside the spec, but rather that it has lowered below a quoted value. Knowing that the response extends outside the hearing limit means that not only will it produce sound linearly within the quoted frequency but it will also not degrade in volume until so far away from the human hearing limits that even the aforementioned harmonics wount affect the fundamentals you're listening has.

Here is an interesting article that can give some insight on this.

Specifically to your question, here is a section that relates to this.

The sounds that are “beyond” the human range of hearing and ones that you can only feel. They are known as “harmonic frequencies” which are musical notes that can reach outside the “hearing range” while the ones you can hear are known as “fundamental frequencies“. Instruments in particular have a great variation in harmonic frequencies as the frequency for each note is different on each instrument allowing you to tell they are well… Different instruments.

Thus if your earphones/headphones/speakers have a wide frequency response and you are using lossless files, music should sound better – especially orchestral recordings.

The 'frequencies you can feel' argument is arguable, and probably valid to some degree.

However, there's another argument, which is easier to support with physics and acoustics, to do with the ways in which the response of headphones is measured. Speakers with a 'response' from 20Hz to 20kHz cannot have a nice linear response (same output power for same input level, which is what you want for accurate reproduction of sound) across that range of frequencies, and then immediately drop to no output at all at 19Hz and 20,001Hz. The frequency characteristics of speakers are determined by the frequency characteristics of materials and electronic components, and there's no way to have a steep 'roll off' of this sort, without distorting the frequency response within the wanted range as well.

Any frequency filtering (whether done electrically, digitally, mechanically, or acoustically) will affect a large range of frequencies - theoretically all frequencies (though to a very small degree, far away from the filtered frequency). Likewise, all speakers will probably produce sounds from 1Hz to 100kHz (and beyond) - just not linearly for a given input level.

If a speaker is deemed to have a response from 6Hz to 51kHz, this is probably the range with a reasonably linear response - probably something like +/- 6dB. This will mean the audible range from 20Hz-20kHz can be made lovely and linear, with increasingly poor response between 6Hz-20Hz and 20kHz-51kHz, and worse response still outside that range. If the published range is 20Hz-20kHz, however, you can be pretty sure that at the 20Hz and 20kHz points, the measurement is at the limit of the +/-6dB point, meaning that there will be colouring of the sound, probably from 20Hz-100Hz, and from 15-20kHz, which would be audible to human ears!

An analogy would be an F1 car. On an infinite straight, they would hit a much higher top speed than they do on a track, they are never going to reach that limit on the track. Likewise, they can go very slow, but never need to, and don't do it well. So they are designed to work exceptionally between the limits of the track. There's no point designing a car that has a maximum top speed and minimum speed required for the track, as the performance would be very limited between those limits.

Or maybe your dog would like to use them? :)

Its simple really. Headphones are designed with components to sound the best in the audible frequency range. Sometimes certain headphone designs result in a frequency response that is above or below the audible spectrum.

This isn't the most scientific answer but neither is this the most Sound Design question. Its also Christmas.

I've got to say however that in my mind, most music is sampled at 44.1KHz anyway which means that sweet 50Khz tone wouldn't even be reproduced to affect your lower frequencies and anything below 20Hz should ideally be killed in any mix imaginable. And even if there are 10Hz tones they are definitely not being produced at adequate amplitude by a set of 1 inch headphone drivers to effect you in the way 'Infrasound' is allegedly supposed to.

So the answer to what's the point? Nothing really just bigger parameters on a tech spec I'm guessing. Either that or they're earphones for cats and elephants.

I disagree. There must be something else around here that we dont know yet. Perhaps an engineer could help, i dont know. What do i know is this: Last two days i broke my Pionner at 8 - 22 khz 108. Last songs i was listening was heavy metal at flac and wav. Yesterday i bought a Sennheiser at 17 - 21 khz 118. And guess what... i hear some songs different than before! I did my research and it seems that i could not hear the bass of Trujillo. I set the equalizer in the player at maximum, the 20 hertz of course. And... nothing.

I return to my PC, and here at home i really got the equipment for monitoring audio, with panasonic headphone and soundblaster inside among other beauties. So... i am crazy? no... i test the song and there it was, the bass, clear as a bell. No need to touch anything. So... unplug panasonic and jack my news sennheiser 17-21k, and... no more bass.

A magnified in the adobe and the audacity, i SEE the frecuency going, but just a little noise in the headpiece.

So my friends. That low frecuency in the devices, DO something. I dont know what it is. But there is some.

My adivce ? When buying something and spend half of you monthly payment haha, pick a device that can get the long and best RANGE in frequency. If it starts at 8 would be better than 17, if its starts at 6, would be even better, and so on. I learn from my mistakes, and i worte this so you dont fall in the same, that frecuency thing... is NOT marketing.

Headphones have comparably small moving parts and low loudness. They need to reproduce low frequencies with "enclosures" that have no relation whatsoever to the wavelength of the sound and it is actually the "closed" side where the listener is rather than a wide open space. So there is no similarly important low frequency threshold like the resonance frequency of bass speaker enclosures: loudspeakers need to be efficient for low frequency production, headphones not so much.

The wavelength of sound at 20kHz is still about 17mm (or .675in) meaning that soundwaves do not have much of a chance to become incoherent in relation to the ear canals. The tricky thing is to straighten the frequency response in the vicinity of the resonance of the ear cup. But that's the middle rather than the extremes of the hearing range.

So excessively large ranges tend to be not much work (if at all) over good in-hearing ranges. However, speakers (and also headphones) are usually the parts in the sound reproduction chain most susceptible to non-linear distortion. So if you are listening to a combined broadcast for earth worms, humans, and bats, the quality of the human part may suffer if the others turn up the equalizers for their parts (which should be inaudible to you in a perfect world) too much.

Not the answer you're looking for? Browse other questions tagged headphones frequency-response or ask your own question.

2
Why are there headphones with frequencies beyond humans can hear?