How to buy music so that the greatest proportion of the money goes to the artist? [closed]

Ask Question
Asked 11 years, 10 months ago
Active 2 years, 7 months ago
Viewed 683 times
3
Closed. This question is off-topic. It is not currently accepting answers.

I assume that buying CDs at shows or from the artist's own record label website directly would be the best way. True, or not?

For instance, how much money do artists get when you buy mp3s on iTunes or Amazon.com?

Is it true that musicians make most of their money from selling merchandise?

It depends on how you distribute your music to iTunes. Some e-distributors take up to 50%. I use Tunecore who charge a delivery fee and a yearly storage fee only. This way you get to keep all of the money from iTunes, etc. without another party taking a cut. For example, we get around $7 for selling a $10 album after the iTunes fee. With an older service we no longer use (who I won't name) we would have received $3.50 or less. Unfortunately, buying a CD at a show usually doesn't go into the SoundScan database, therefor not contributing to the artist's sales numbers.

Here's an infographic on the proportion of money that goes to the artist and label for different types of music sales, as of 2010: 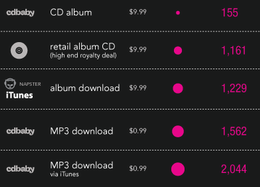 I don't have the numbers, but I asked this same question of a longtime musician pal of mine, whose album I wanted to pay for to support his band. He suggested going to iTunes. Short of paying someone in person at a merchandise table at a show, that's what he recommended. I'm afraid that I don't know the exact math on the revenue split.

Small bands don't even make merch per se, but they usually sell actual CD's or even vinyl. (My friend mentioned above released a 12" with a download code inside the jacket sleeve for 320kbps MP3 files online, nice way to split the difference.)

If the artist has a Bandcamp page then that is the best way.

Not the answer you're looking for? Browse other questions tagged sales or ask your own question.