Weird stuff... so the video editor, working with FCP on Mac exported a .mp4 @ 25 fps (true -- I even saw the stream info) and sent it to me. Even before I opened the file (PC) I went to its properties and it said 15.48 fps. I opened it on another PC and it was the same 15. I imported it to Cubase and there were the 15 fps.

As if it's not weird enough, the lentgh of the file labeled @ 15 fps is still the same 8m14s as has the "original" at 25 fps... at the file properties.. Imported at Cubase, the playback is actually FINE, but the thumbnail cachet generated in the timelime stretches until around 13 minutes, although the video playback stops at the correct end of the video at 8m14s. So I checked out the box dialogue of video import and it appeared 13m19s of lenthg!!

Sent the file back again to the video editor and it was nice and neat @ 25 fps!

Any thoughts on what is happening here? Thanks!

The golden mantra: "FCP does that". Try importing the project in a new project, then exporting your video again. Quicktime's container header is incredibly flexible and there's maths in there and very often (especially with FPS other than 29.97) FCP gets things wrong in that area, then Quicktime has to guess.

If you're brave enough to see the guts of the video and do some maths, grab an utility called Dumpster, and, while you wait for your editor to give you a new video, look at the numbers:

To get the framerate of the video track, see "trak > mdia > minf > stts". Dividing the video track timeScale by sampDur should get you the frame rate. One of those values is wrong. The Quicktime player corrects it before showing you the video (based on some common sense, assumptions, and knowledge about the shortcomings of FCP). I assume not the same happens with the Quicktime or QTKit libraries which other software use to import and play the video. 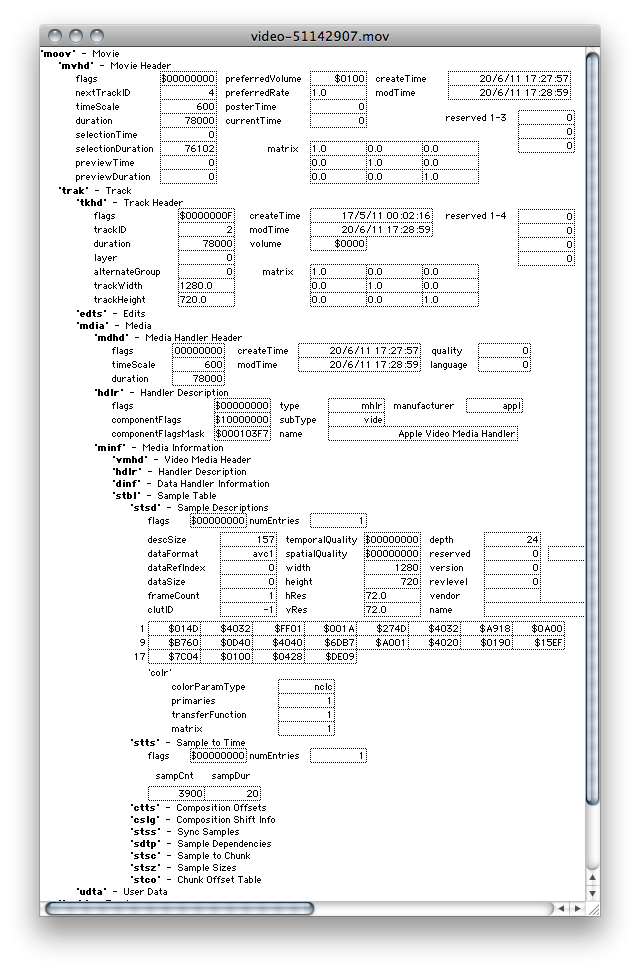 Now for the kicker: You can click to edit these values, then press Cmd+S. Backup your file.

Did you get 25fps burnt in timecode? If you had then you could put it in a 25fps timeline & step through it 1 frame at a time & prove if it is right/wrong...

With these you can prove whether the LFOA is correct, whether the video is the correct speed & the burnt in timecode is correct...

Not the answer you're looking for? Browse other questions tagged fps frame-rate or ask your own question.

0
Audio SYNC question regarding a FPS conversion from 24 FPS to 25 FPS
2
What's audio equivalent of FPS in video, and what's the current limit of capturing the maximum?