Looking at the waveform below, there is a "bleeding". Is this ok or is something that should be fixed? If so, how? 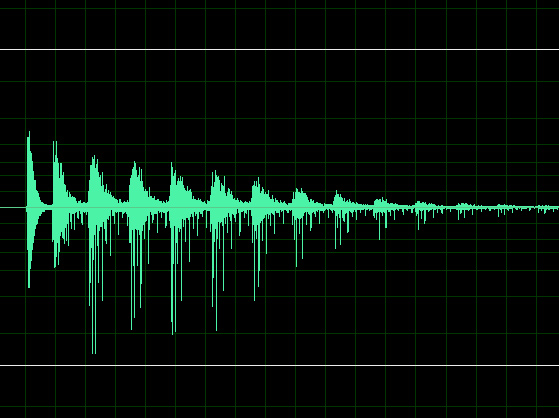 if your ears say it sounds good, it's probably good.

+1 to Rene, the audience won't be looking at your waveform.

Does anyone know what causes this, though? I've had some waveforms that look like their centre axis is well below where it should be. It doesn't bother me, as long as it sounds fine, but i wonder what causes it.

I used to get similar waveforms off their centre axis as you've described, and would get rid of the DC offset by running the wave through a destructive high pass filter at 0hz. Think for me it was caused by ineffective grounding of my (at the time quite rubbish) mixer, though not entirely sure about that.

I've seen this many times, no matter if it where through my Lynx-systems, as close to perfectly reproducing as one can get in recording, or my fieldrecorders. As far as I can tell it seems to be due to two reasons;

First of all, for a sonic waveform to get negative, the source must vibrate both positive and negative. As far as I know the air only moves in the very direction it's shoved, and SHOULDN'T, though mind you this is just my theory, be able to blow back unless it's actually pulled back into a negative part-cycle. Most, if not practically every, physical item that resonates does so both back an forth, thus both compressing and expanding the air it moves.

Secondly, I often see this on heavily distortet electro-acoustic material, as well as some very unsymetrical waveforms. It might very well be a matter or energy. The more something resonates in one direction with high energy, the more it has to compensate on the other side of the cycle, though in amplitude, to make up for the same energy.

Personally I think it's a total combination of the two. Only pulses can be made to go in only one direction, and pulse and square-waveforms aren't exactly common in nature. At least not in a pure state.

Not the answer you're looking for? Browse other questions tagged sound-design sound-effects problems or ask your own question.

3
Having some absolute base quality sounds to use as a palette for sound design?
1
Free lance audio book editor.
1
Saw SFX Question
3
Regarding “starting up” sound of 3D pinball
1
How to create rolling lfo effect
1
Name of effect and mathematical underpinnings
0
How to create a space shuttle take off sound effect?
0
Center waveform amplitude to 0?