Does any one have any information on the types of mics that were used on film sets during the 60's and 70's? Here's a screen shot from Bergman's Persona...Anyone know what kind of mic this is? 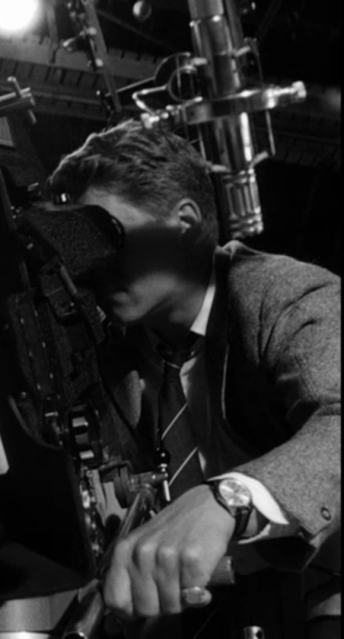 This web page may help you. The guy who made the page says you can contact him for any questions about vintage mics :) cheers http://www.vintage-microphones.de/index.html

I agree with Utopia that it's an old AKG, although it looks like it's possibly attached to a Fisher Boom (JL Fisher), albeit an old one.

If I had to guess, I'd say it's some sort of old AKG mic. Looks a lot like a C12 but with extra grills at the tip.

That doesn't look like a mic they were using for booming. Looks just like they were using it as a close-up side-address announcer or VO mic. What is he doing in the pic?

I'm not sure, I would say ribbons and dynamics. Specially the AKG D12 in some point. Didn't The production mixer of "The Good German" or "Good Night Good Luck" used ribbon mics and plant mics to match the sound of the 50's, 60's?

Not the answer you're looking for? Browse other questions tagged vintage film microphone or ask your own question.

2
VO Pop Screens that do the least coloration.
0
Would motif or artistic direction influence what mics you use?
4
Cigarette smoke and mics
1
Vintage foley microphones
1
Capturing audience reaction during a concert.
0
DPA 4060s-ways of placing them during field recording
4
What type of mics for recording effects/foley?
1
Is a used AT835b worth it?
1
What mic should I used to record a roundtable discussion in a noisy convention center?
6
What are the most used types of microphones and what are they best used for?