What are Established Users?

Established users are those who have been participating on the site for a fair amount of time. They gain the following privileges.

How do I view vote counts?

You can view the vote counts by clicking on the score of a post. This will break the score into upvotes and downvotes, like so: 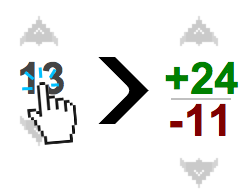 How do people see an expanded usercard?

When anyone is viewing your usercard on a question, an answer, or on the users list, they may hover over your avatar to produce an expanded usercard that contains extra information. This is also known as a hover card. 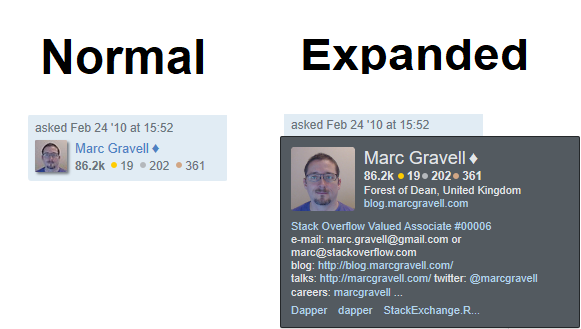 What information is shown on the expanded usercard?

Your expanded usercard will show the following information:

If you don't want the exact text of your About Me section there (such as it is too long and gets cut off, or because the formatting is weird), then you may use a summary comment using the following syntax:

Replace [your text here] with your desired summary (of at least 28 characters), and that will be placed on your expanded usercard in place of your About Me section. Note that because it is an HTML comment, you cannot use any HTML such as for links. The spaces before and after summary: and before the closing --> are required to use a summary.

What if I don't want an expanded usercard to show?

If you have a long profile About Me, but don't want there to be an expanded usercard for any reason, you can use the summary comment with an insufficiently long passage to render your profile as "too short" for display. For example, the following will be considered too short.

You've been around for a while; see vote counts